The Sinclair Health Clinic Has A New Executive Director! 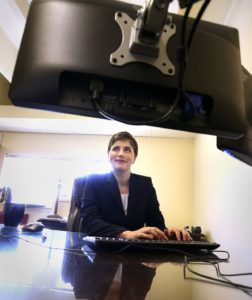 McClure has an extensive background in public health. She graduated in 2007 with a bachelor’s degree in health and societies and philosophy, politics and economics from the University of Pennsylvania. She later earned her master’s in public health from the Yale School of Public Health in 2011.

McClure said she’s passionate about improving the patient experience and access to care for under-served communities. Providing health care for those who can’t afford it is “rewarding” work, she added.

“For patients without the resources to have access health care, it’s a hard life to have the issues they have to deal with on top of the stress of making ends meet,” McClure said. “Taking care of just this one thing — their healthcare — and making it accessible so that they can live, that’s an incredible mission.”

McClure knew she wanted to pursue public health in college when she realized some people have a higher or lower life expectancy depending on where they live. Public health can tweak certain factors and possibly save lives, an aspect of the profession she found fascinating.

McClure is originally from Sacramento, Calif. She recently moved to Berryville from Baltimore, Md., with her husband and two daughters.

Elizabeth “Libba” Pendleton, chairwoman of the clinic’s nine-member board of directors, said she was impressed by McClure’s work and educational experiences.

“She’s just going to be a very dynamic leader, and we’re excited to have her,” Pendleton said.